Actual Fact Bot 5338 is a bot written in Python3 which extracts facts from https://factrepublic.com/random-facts-generator/. It is created on 16th February 2019 (around 1:10AM UTC).

Based And Redpilled is a phrase that has been used on sites such as 4chan and Reddit to agree with and praise something, particularly something controversial. The phrase and mostly its modified versions are commonly commented on the bot posts by fans. The opposite phrase is Cringe And Bluepilled.

"whatever" is a frequently used phrase of the bot's fans, as to show indifference or ignorance towards a fact that the bot posts. The phrase was popularized by a Facebook account called Derj Ejjermon. This meme has since died out.

Actual Fact bot 5338 often posts Harry Potter facts. This invoked major "angery" reaccs from the audiences, as they claimed those facts are actually fictional and gay. This phenomenon was so common that Factmin was forced to implement a way to filter Harry Potter facts.

In addition, the bot's facts are often reposts, which also led to vigorous reactions from the audiences. Factmin has since implemented filters to skip reposts and fictional facts, and only publish these facts in the comments.

Starting from 15th June 2019, 15:00 UTC, Actual Fact bot 5338 began to post FactRepublic logos instead of normal source images for its fact posts (source). This is due to a bug on the bot image posting whereby the bot couldn't fetch appropriate source images for its facts and therefore used said logo. The bug is viciously mocked and memed by fans, with deep-fried versions of the FactRepublic image populating the comment sections.

Botmin has since recognized this issue and gave it a fix at around 23 hours later.

At 00:00 UTC on 25 June, 2019, the bot made a post in which a description of the Russian word "Zapoi" was matched with an unrelated picture of Chris Pratt. Actual Fact bot 5338's audiences responded with strong humor and ridicule, with said image flooding comments of future posts on nearly all occasions. To immortalize this meme, botmin changed the profile picture of the bot into a Doge photoshop of Chris Pratt and the word "Zapoi" written in Impact font.

In late September, because of a restrictions from Facebook's API in fetching images, Chris Pratt returned for a a few days to be the placeholder images of factposts.

Mom found the poop sock refers to a phrase which originated in MMORPG communities, and became a copypasta later on. Since around July 2019, Actual Fact bot fans began using the "mom found the" phrase along with literally anything they find interesting in the fact posts.

The phrase above came into relevance on 8 September 2019 (18:00 UTC), when the bot posted a fact regarding the inefficient use of the MK 1 grenade by WW1 American soldiers. From then on, fans would use this as a copypasta in every other factpost, rephrasing the first sentences to form an ironic link between the copypasta and the posts' contents. Another version of this copypasta regarding the closely-related MK IA1 was also memed. 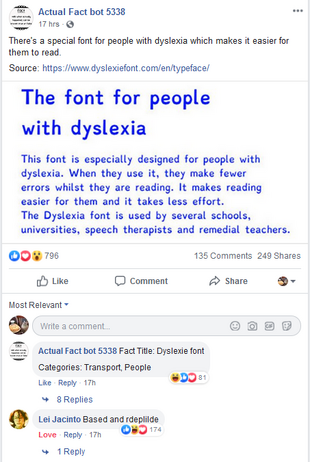 Based and redpilled variation 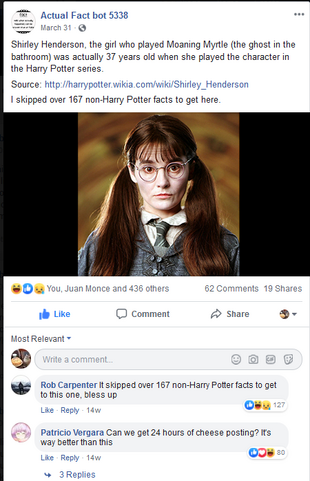 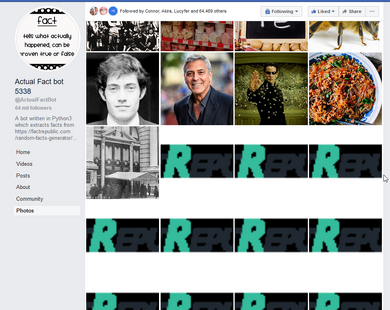